Let's Describe the Purpose of This Page Here

In the early 1940s, recognizing that they could accomplish far more through cooperation rather than individual effort, the Atlantic coast states came together to form the Atlantic States Marine Fisheries Commission (Commission). An Interstate Compact, ratified by the states and approved by the U.S. Congress in 1942, acknowledged the necessity of the states joining forces to manage their shared migratory fishery resources and affirmed the states’ commitment to cooperative stewardship in promoting and protecting Atlantic coastal fishery resources.

To promote the better utilization of the fisheries, marine, shell and anadromous, of the Atlantic seaboard by the development of a joint program for the promotion and protection of such fisheries, and by the prevention of physical waste of the fisheries from any cause

Who Is the ASMFC?

For over 75 years, the Commission has served as a deliberative body of the Atlantic coastal states, coordinating the conservation and management of 27 nearshore fish species. Each state is represented on the Commission by three Commissioners: the director of the state’s marine fisheries management agency, a state legislator, and an individual appointed by the state’s governor to represent stakeholder interests. These Commissioners participate in deliberations in the Commission’s main policy arenas: interstate fisheries management, fisheries science, habitat conservation, and law enforcement. Through these activities, the states collectively ensure the sound conservation and management of their shared coastal fishery resources and the resulting benefits to the fishing and non-fishing public.

The Council coordinates its management activities closely with several other management bodies to ensure that fisheries are managed effectively across jurisdictional boundaries. Spiny dogfish and monkfish are both managed under joint fishery management plans developed by the Mid-Atlantic and New England Council. Many of the Council’s managed fisheries are fished for in state waters or outside of the Mid-Atlantic region, so the Council works with the Atlantic States Marine Fisheries Commission to coordinate management of summer flounder, scup, black sea bass, bluefish, and spiny dogfish.

The New England Fishery Management Council, one of eight regional councils established by federal legislation in 1976, is charged with conserving and managing fishery resources from three to 200 miles off the coasts of Maine, New Hampshire, Massachusetts, Rhode Island, and Connecticut. 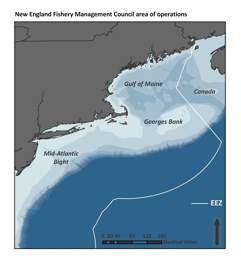 The management authority of the Council extends to the Gulf of Maine, Georges Bank, and southern New England, and overlaps with the Mid-Atlantic Council for some species in that region. Major ports include Portland, ME, Gloucester and New Bedford, MA, and Point Judith, RI.

The Council’s 18 voting members are organized as follows (positions listed in the first two categories do not have term limits):
Hours of Operation
MON – FRI
8:00am – 5:00pm

Drop Us a Line

Don't be shy. Let us know if you have any questions!

Any cookies that may not be particularly necessary for the website to function and is used specifically to collect user personal data via analytics, ads, other embedded contents are termed as non-necessary cookies. It is mandatory to procure user consent prior to running these cookies on your website.